This PGA Tour season has seen some crazy ups and downs. Players winning a lot, players getting injured and even guys not playing much. But one of the bigger storylines that has kind of gone unnoticed is the sneaky rise of Pat Perez this season.

The 41-year-old golfer has had a real out of no where season.

He has only missed three cuts all season.

That is almost unheard of on tour.

To go along with that he has turned out great performances including a win at the OHL Classic at Mayakoba, T4 at the Farmers Insurance Open, T2 at the Wells Fargo Championship and T5 most recently at the Dell Technologies Championship.

This all rests on Perez receiving shoulder surgery last year and thinking he would never play again.

“It’s amazing when you grind, grind, grind forever and don’t really have problems. And when it’s taken away from you, I just had a whole different vision. I can have it all taken away. A shoulder can go out again. So I guess I’m putting everything into it.” Perez said in an interview with the Denver Post.

Now Perez is healthy and playing the best golf of his life.

He is currently ranked 35th in the world.

He came into 2017 ranked 118th in the world, so that shows for his season there alone.

If you look at the Fed Ex standing he is also having a career year there.

Last weeks 5th place finish at the Dell, guaranteed him a top 10 finish in the Fed Ex standings.

Last season he didn’t even qualify for the Fed Ex Cup so whatever happens at these next two tournaments is a huge improvement over last season.

Pat Perez is having a season for the books, and it is crazy no one is talking about it. 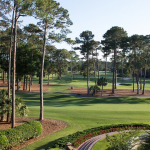 Let’s Get Prepared to Beat the Heat on the Course

Now that Memorial Day weekend has past, we are officially…