Who’s Going To Make The Cut?

Now that the U.S. Open is over, the next tournament on the docket is in our backyard – The Travelers Championship.

This year’s field is loaded with studs, which means it’s time for my predictions.

My “Well Duh” pick, my “Dark horse” pick, and last, but certainly not least, my “Wilfore have you ever watched golf before?” pick.

3. Wilfore have you ever watched golf before? = Bryson DeChambeau

Look for one of these few in the winners circle, but more realistically, just look for them to make the cut. 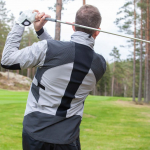 Galvin Green is one of the most unique golf clothing…