Earlier last week one of the PGA Tour’s brightest stars Rory McIlroy made a huge change to his bag, and it didn’t involve clubs.

This was shocking news after McIlroy finished T4 at The Open and seemed to be heating up at the right time like last year, when he made a late season run and won the Fed Ex Cup.

The two were very good friends, and to preserve the friendship, he had to go.

“Sometimes to preserve a personal relationship you might have to sacrifice a professional one, and that was sort of the decision that I came to in the end.” McIlroy said in an interview with Golf Channel about the tough decision to split up with his caddie.

He mentions that sometimes when he hit a bad shot, he would find himself blaming his caddie and not himself.

“It wasn’t an easy decision, but at the end of the day I felt like it was a change that I needed to make,” He added in the same interview.

McIlroy will have a new looper for this weeks PGA Championship.

His name is Harry Diamond, one of McIlroy’s best friends and best man at his wedding.

Rory played well at the WGC-Bridestone with Diamond on the bag, so maybe he can carry that good play to Quail Hollow this week.

His long term caddie plans are yet to be determined.

He could stick with Diamond for the long run, or even return to Fitzgerald.

Or what I would like to see, Bones out of retirement? Could be a possibility.

No matter who is looping for him, things will stay the same.

He is going to hit the ball a mile and be in contention week in and week out.

Hopefully he can be in contention at next years Masters for the career grand slam. 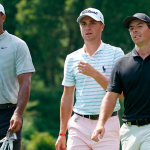 This past week, SwingU has announced the launch of their…