We all want to hang out with a celebrity.

In the golf world, playing an 18-hole round with a celebrity would be the coolest experience ever.

However, some celebrities aren’t the best at golf. Others could be decent, yet they have the personality of a Styrofoam cup.

So here are the four best celebrities to play golf with and who you can get to know after your round:

Celebrities have free time once a blue moon, and when they do, they are not too bad on the course. 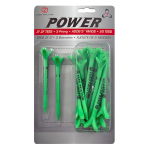 New equipment alert! Zero Friction has recently announced that they…