This year marks the 100th year anniversary of the PGA of America and Jim Remy is a past president, the first to be from the New England PGA section. This interview by New England Golf Monthly with Jim Remy explores what makes the PGA of America so great and how it has evolved over the years. So before you tee off this morning at Cranberry Valley take some time to read about what makes the institution of our favorite sport so awesome! 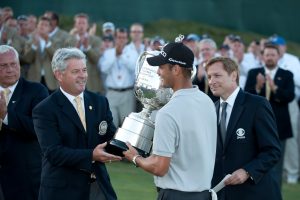 Jim Remy presents Martin Kaymer with the Wanamaker Trophy at Whistling Straits in 2010. CBS commentator Bill Macatee stands to Kaymer’s right. is celebrating its 100th anniversary this year, and Ludlow, Vermont’s Jim Remy, a past president, represents what has made this a thriving organization of more than 27,000 professionals. Currently the VP and GM of the Okemo Golf Division at Okemo Valley GC, he has worked at one of New England’s leading ski and golf facilities since 1997.

The PGA of America is celebrating its 100th anniversary this year, and Ludlow, Vermont’s Jim Remy, a past president, represents what has made this a thriving organization of more than 27,000 professionals. Currently the VP and GM of the Okemo Golf Division at Okemo Valley GC, he has worked at one of New England’s leading ski and golf facilities since 1997.

Remy became the first New England PGA Section member to become president when he was elected in 2008. He promoted both the business aspect of the profession and the fitness and healthy lifestyle that the sport can provide.

Remy and his wife, Darlene, live in Ludlow and have a daughter, Niki.

NEGM: What was most important to you as you were growing up?

JR: I grew up in Leominster [MA] and played football and baseball on the Blue Devils high school teams. At 12, I started skiing and fell in love with it. During the summer, I played golf at a little nine-hole course called Grandview. I was involved in sports all four seasons. Sports, sports, sports. That’s all I wanted to do. After I graduated from high school, I told my mom I was going to Vermont to teach skiing for a year and then I’d go to college. That was 43 years ago, and I’m still in Vermont.

NEGM: How did you become a golf professional?

JR: I was a professional ski instructor in Ludlow and a racer for the US Pro Ski Tour in the 1970’s. After about seven years, I knew I needed a dependable summer job so I asked PGA pro Ed Bellow at the nearby Fox Run GC, “What do I have to do to become a golf pro?” I entered the PGA golf professional program and got my first assistant job at Worcester CC [MA], and I found my dream. The combination of skiing in the winter and golf in the summer just worked out perfectly. My apprenticeship continued at Mt. Pleasant CC in Boylston [MA], and when I got my Class A card, I became the head professional at Killington Golf Resort and the Director of Ski Competitions. I worked there for 13 years before returning to Ludlow in 1997 to help build the Okemo Valley Golf Course.

NEGM: How has the PGA of America evolved since you became a member?JR: The PGA has always been evolving, but it always 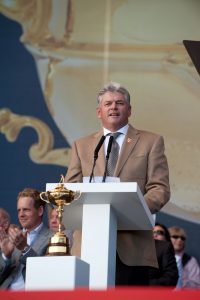 sticks to its original goals—to grow the sport of golf and to improve the standards of the profession. The 27,000 men and women of today have made the PGA a much larger and a much healthier organization than when I first joined it. I think we have taken on more of a business role as we try to grow the game. We’ve seen a downturn in the last 8-10 years. We’ve seen a generation go away from golf, and the PGA has taken the lead—through the PGA Junior League, Get Golf Ready, and Play Golf America among other programs—to rekindle that interest in a great sport and a great pastime for kids and adults.

NEGM: What was your main focus as President of the PGA of America?

JR: My two years as President, 2009-10, were a very trying period for the organization and its members as we were going through a severe recession. I was a members’ president. I’m a grass roots guy—a club pro in Vermont. Simply, I was a golf pro just as they were. I had to try to keep people positive, moving forward in the business. I talked a lot—including to CBS Sports commentator Jim Nantz—about the health and welfare inherent in the sport and what’s good about it and why people should play golf. People who play golf live longer; kids who grow up in golf become good people. We all learn responsibility, honor, ethics, and other wholesome characteristics through the playing of golf.

NEGM: In 2011, why did you propose the posthumous induction of John Shippen, Ted Rhodes and Bill Spiller as PGA members and heavyweight boxing champion Joe Louis as a posthumous Honorary PGA member?

JR: One of my greatest and proudest moments of being a PGA member and a PGA officer was that occasion in New Orleans when we recognized these four African-American pioneers who made a huge difference in the direction of American golf. I apologized to the four families that it took so long to induct those men. It should
have been done a long time ago. It was a moving day. Joe Louis was an avid golfer. He did so much for golf, due to his celebrity status, and he started to break down that race barrier. Because Joe was not a golf professional, like the other three men, he had to receive an honorary membership.

NEGM: What are your favorite NE courses? Favorites around the country and world? 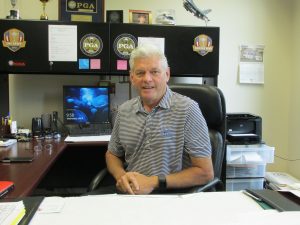 Cypress Point, Augusta National, The Old Course at St. Andrews, and all the unheard of but magnificent courses in Scotland.

JR: I just love the Irish boys, having spent a lot of time with them at the Ryder Cups: Padraig Harrington, Graeme McDowell, Darren Clarke, and Rory McIlroy. 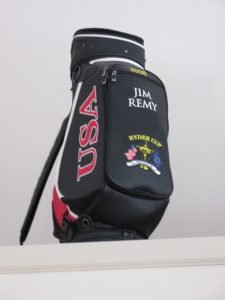 Jim Remy’s 2008 Ryder Cup bag from Valhalla, the last US victory, has a position of prominence in the Okemo Vally GC pro shop.

NEGM: What does Davis Love have to do to get the Ryder Cup back to American soil?

JR: I’ve been to six Ryder Cups and have been involved with four as an officer of the PGA. These are the greatest players in the world, and any captain just needs to give his team the opportunity to win and not get in the way. Davis Love was the captain at the heartbreak at Medinah in 2012, and I think he’s learned from that. He’ll be able to help his players to relax, have fun, play their best, and avoid the incredible tension of the competition. Each pro has to embrace the moment, much like Bubba Watson on the first tee at Medinah when he got the fans involved. He embraced the moment, and he got everyone motivated. The players can’t make it happen; they have to let it happen.

(Photography courtesy of the PGA of America)

Titleist is known for its dedication to creating complete performance…